This is Name Changing 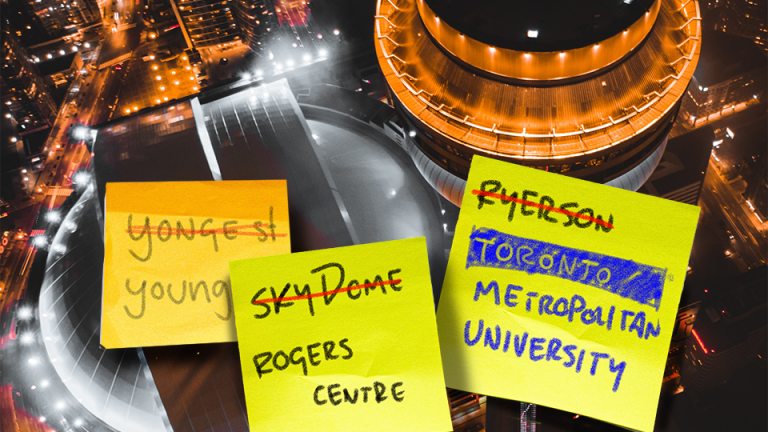 You are right, everything about the last paragraph is accurate with the exception of the alternative name; and, as far as I am concerned, there are no plans to change the name of the most iconic landmark of Toronto. According to Britannica, the Canadian National tower, or CN Tower, was built by the Canadian National Railway and was privately owned until 1995 when it was transferred to the Canadian government. I would think that being part of the government and the most recognizable construction in Toronto, would reduce the likelihood of having its name changed. Yet, changes of that magnitude do happen and we don’t have to look far to find good examples.

Southwest of the aforementioned CN Tower we find the SkyDome. The “Dome” officially opened its doors on June 3, 1989. The name SkyDome was the result of a province-wide contest. According to the Toronto Star, there were over 2,000 entries suggesting the name SkyDome. Of those, Kellie Watson of Wallaceburg Ontario was the lottery draw winner. She was awarded two tickets for every event, to be held at the SkyDome, in her lifetime. And then the SkyDome changed its name; in 2004 the stadium was acquired by Rogers Communications and in 2005 renamed as Rogers Centre.

It is not uncommon that companies acquire the rights to name big event venues after their brands. As you might expect, as these contracts expire or the venues are sold, they change their names once again. The Sony Centre of the Performing Arts was once known as the O’Keefe Centre, today it is called the Meridian Hall. The Molson Amphitheatre is now the Budweiser arena and the Air Canada Centre, home of the Toronto Maple Leafs, is today the Scotiabank Arena. What about universities? Are they also prone to changing their names?

On April 26, 2022 it was announced that Ryerson University, officially changed its name to Toronto Metropolitan University. This was not the result of an acquisition or a contract with a new sponsor. There were concerns about the linkage between Egerton Ryerson and his involvement in the residential school system. In June 2021, the statue of Ryerson located in the  university grounds, was toppled and beheaded. A few days later, hundreds of professors and faculty members signed a petition demanding the school changed its name. According to a news release, Truth and Reconciliation was a key priority for the school in considering a new name.

What about streets, do they also change names? According to a Globe and Mail article, Yonge Street is named after a monument to mediocrity. Yonge Street, built over an important pathway for indigenous people (The Carrying Place Trail) was named in 1793 by John Graves Simcoe, after his British parliamentarian friend Sir George Yonge. According to the article, the 5th Baronet was not very popular amongst his constituents, he spent large amounts of money in his campaigns and bad business investments. He died in 1812 in ignominy, indebted and without an heir. Maybe it is about time to change the name of the most famous street in Toronto. This time we could name it after a prominent Canadian musician. What about calling it Young Street?

P.S.: 17 years after the SkyDome was renamed as Rogers Centre, Kellie Watson continues to receive 2 tickets for every event. Let’s hope she gets to see the Blue Jays win another World Series in the near future.

Also you can read: The longest street in the world?