This is an Example of Good Design 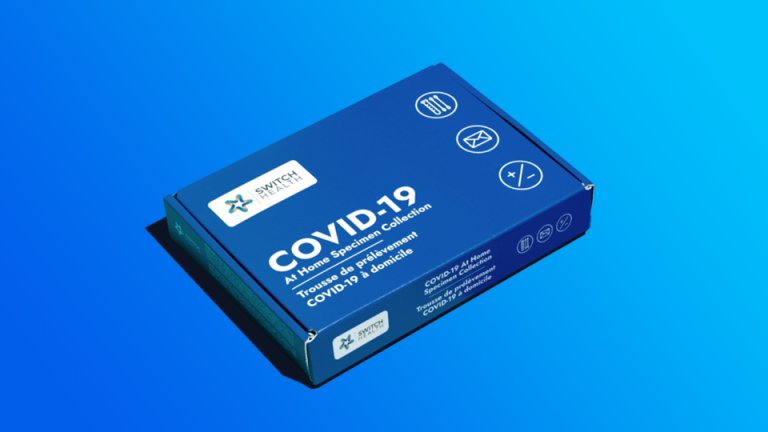 As you probably know, as of December 15th, non-essential travel outside of Canada is discouraged. If you happen to be abroad and are returning to Canada, you could be randomly selected to take an arrival test at the border, regardless of your vaccination status. Traveling these days means, among other things, that you are going to get swabs inside your nose at some point or another; maybe multiple times. When we returned to Canada this January we were randomly chosen, together with almost 80% of passengers, to take the test at the airport. My 10 year old son, who wasn’t fully vaccinated at the time, would have to do another test on day 8 of arrival.

Switch Health is a Toronto-based healthcare company. They are one of the companies partnering with the Government of Canada for COVID-19 testing. They produce a self-swab testing kit designed to be used at home. It was not clear to me if we were supposed to get their kit at the airport, buy it at a pharmacy or receive it at home. Day 8 was approaching and we didn’t have the kit, so we called Switch Health to ask. I didn’t know what to expect but what happened next really surprised me.

Our call got through somewhat quickly. Trying to speak to a human at a call center in this day and age can be a difficult task; so a ten minute wait felt like nothing. The rep answering the call was friendly and helpful and we got the kit two days later. The next step was to log into their system and get ready for a video call. This part of the process was the most surprising of all, you need to swab yourself but you do it supervised, through your computer, by a health professional. 40 people were in the online queue when we entered. The kit includes everything you need and it is laid out clearly. When you open the box you find, inside a sealed plastic bag the swab. In a separate place, a sealed tube that contains a liquid where you are going to introduce the sample.

Our waiting time was about 20 minutes. The nurse that talked to us was again friendly and professional. She told my son how to administer the test, she kept track of the time and guided us through every step of the process. The call lasted maybe 10 minutes. During the call my son placed the swab in the tube. Sealed it, labeled it, put it back into the box, closed the box, attached a sticker (included in the kit) to seal the box, placed the box inside the Purolator envelope (also included in the kit) , sealed the envelope and disinfected it with the alcohol prep pad included.

I went through the Purolator website and was able to schedule a pickup time for later that day. 30 minutes later the doorbell rang, a Purolator agent was in the area and was picking up the package a few hours ahead of schedule. These days being negative is a good thing. A couple of days later, we were pleased to end our quarantine when the negative results arrived.

Discover more the author: NFT might be the future of art