The Totem Poles also known as Monumental Poles are big sculptures created out of a red cedar pole. The evidence says that the first Totem poles were created by Westcoats Indigenous people, with the main intention of registering their own history with colorful paint and variant signs. We can see that each clan and family craved in the pole their dances, songs, territories, and rights about their lands. Contrary to what some people believe the Totem Poles are nothing like gods or characters in history.  So let’s find out some of the main carvers, and explore some of their more common signs.

Here we have 3 of the most recognized carvers who kept the tradition of Totem poles Alive. Charles Edenshaw – Haida (1839-1920). He was born in a period when his people were Flourishing in art and economy. Charles is known as one of the most innovative artists working on the West Coats. His artwork has been exhibited as Fine art in many museums around the world.

Chief John McCarty, Makah. (1850-unknow). Well known for his ability to carve canoes used in whaling and sealing. One of his most recognized works is when he created a Thunderbird with movable wings which were used to tell a history of how a thunderbird captured a whale for food. Also known because he helped to protect Tribal Whaling rights and has fostered connections between tribal and non-tribal governments.

Mungo Martin, Kwakwaka’wakw (1879-1962). He carved his first important Totem Pole for Alert Bay in 1900. One of his most important roles was to work as a restorer for the University of British Columbia. From the 50s to 60s he created replica poles for Thunderbird Park for the Royal British Columbia Museum in BC.

Some of the most common figures we can find in Totem Poles are the Raven (which represents wisdom and understanding), the killer whale (is a symbol for strength), the eagle (use to represent peace and friendship) the Beaver (used to represent persistence) the thunderbird (represent power and protection also known as the most powerful of all the spirits) The bear (represent straight and health), the wolf (represent loyalty, good communication and intelligence) the frog (represent stability) although the totem poles look very colorful and alive the artist always used natural pigments so the colors are limited. Black is made out of graphite and charcoal. Red is made from Ochre and clay-like material, while yellow is mostly made out of clay or mango leaves.  Blue-green is made from copper sulfide. The colors will usually be as we can see in nature but often have a second meaning. For example red can represent blood, war, or valor, and black is always used to represent power. Yellow is the color that represents light and happiness, white is used to represent skies and heavens and green-blue represents rivers and lakes, but also sincerity and happiness.

Now that we know a bit more about the totem poles, the next time you see one maybe you can analyze and find out what represents it for you.

Also you can read: Indigenous artist in Canada 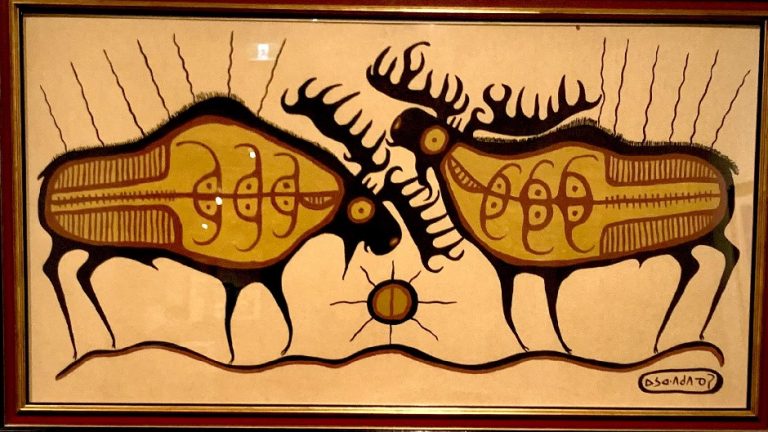 Do you know that in June in Canada we celebrate the INDIGENOUS HISTORY MONTH? Yes, but this month besides being a celebration, is dedicated to recognizing and acknowledging that these lands which now are called “Canada» have a very rich and forgotten past and history. Who are the...