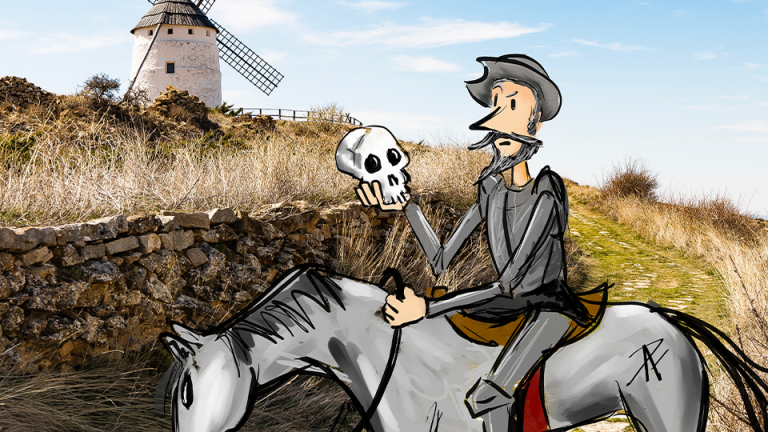 The earth revolves around the sun in exactly 365 days, 5 hours, 48 minutes and 56 seconds. And this is what us humans call a year.

According to historians, Miguel de Cervantes Saavedra, one of the greatest writers in the Spanish language, died on April 23, 1616.  William Shakespeare, one of the greatest writers in the English language also died on April 23, 1616. As a tribute to their great contributions, today we celebrate on April 23 the English language day and the Spanish language day (we also commemorate on the same date: Canada Book day, Slay a Dragon Day and the National English Muffin day) the paradox is that even though Cervantes and Shakespeare died on the same date, they died with a difference of 10 days. How is this possible?

Why did we have two calendars in the first place? If you are like me, it took you years to grasp the idea that a year was not exactly 365 days and that we needed an extra day every four years to put things back in order. Well, back in 45 BCE, the Roman Emperor Julius Caesar ordered a calendar consisting of twelve months based on a solar year. This calendar employed a cycle of three years of 365 days, followed by a year of 366 days (leap year). Sounds familiar? Well, the problem was that the Julian year was a tad too long. Keep in mind that 5 hours, 48 minutes and 56 seconds times four equals 23 hrs, 15 min and 44 seg. When you add 24 hours every four years, you are making the year longer by 44 minutes and some seconds. That is a full day every 130 years.

Over the centuries since 45 BCE, the calendar year was gradually slipping behind and by 1582 the seasonal equinoxes were falling 10 days too early. Pope Gregory XIII called for this to be corrected. The new calendar was adopted in October and 10 days were dropped from the calendar. October 5th was followed by October 15th. The innovation of the new calendar was the way leap years are calculated: any year that is divisible by 4 is a leap year; however if that year is evenly divisible by 100, for example 2000, the year is a leap year if it is also divisible by 400.The next time a leap year will be skipped is the year 2100. Catholic countries and their colonies were the first to adopt the new calendar but it took centuries for the rest of the world to adopt the calendar that we use today.

Also you can read: This is name changing