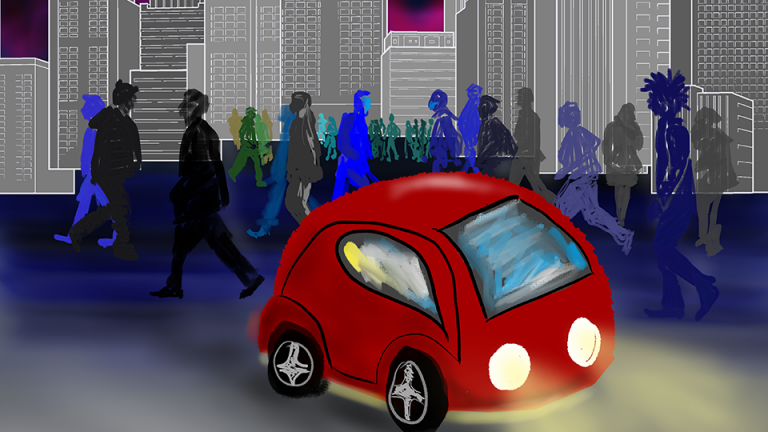 “Mat, do you remember who was the first?” Mr. Rafa asked as he typed something on his phone.

Matias sat down and fixed his seatbelt “Hmm, I want to say it was Robert. Well, not Robert, of course, I mean his dad.”

“What was the name of Robert’s dad. Was it Adam or Anthony? Oh I know, it was Sanjay.”

Laughing at his dad, Mat replied “Sanjay is not the name of Robert’s dad, Dad.”

“No, I meant it was Sanjay, your friend from India, I am pretty sure they were amongst the first.”

Matias unbuckled his seatbelt for the third time “Can we go to McDonalds now?

“We are waiting for Nico” Mr. Rafa said as he placed his phone on the dashboard. “Do you remember the day that Cherry was almost hit by a car?”

“Yep,” replied Mat, “she chased the ball all the way to the street and a car stopped miraculously. Oh! I remember now, It was Daniel’s family!They were in the car, eating breakfast, when their car came to a sudden stop.”

“You are right” Mr. Rafa replied. “They were the first in the neighborhood to own a self-driving car.”

Many years later, Mat was traveling to the artificial intelligence conference in Downtown Toronto. He could have watched it from home but on that day he wanted to go out. After the conference, he was meeting with Sanjay, his childhood friend, for drinks. Whenever Mat was commuting, he enjoyed watching police officers in their cars. He remembered that just a few years ago he had to drive to university. But these days only Policemen and the Military were allowed to drive, everyone else had to use AV’s (autonomous vehicles). Unless, you passed a driving course that basically taught you how to drive like a machine. You also needed to own a hybrid, a car that still had a steering wheel and could be driven by a human. This, of course, increased the insurance policy. Mat, as pretty much everyone, thought it was not worth it.

“A singularity. Is it ever going to happen?” The speaker said as she rose her hands to the air pretending to be disappointed.

Mat nearly missed the beginning of the conference, not to mention the free cocktails at the lobby. In spite of having left home at the time the app suggested he almost arrived late. He looked around and it seemed that he wasn’t the only one rushing to his seat.

“Why is traffic getting so bad?” He thought.

“A singularity, the primordial event when the tech in our lives becomes self-aware. Is it ever going to happen?” The speaker elaborated. “We have been talking about it for longer than I can remember.” She stopped and gave a deep sigh “But, whenever we discuss the progress of artificial intelligence, it seems as if we are always 20 years away from producing the first thinking machines.” She then went on to talk about the latest in machine learning and the first person born in space.

“Sanjay, what do you think?” When Matias arrived at the pub Sanjay was already at the table, drinking his second beer, and talking to whoever was close by. He had never had problems making friends.

“Well, I think you are right, traffic is getting worse.” He said in a deep serious tone. Mat didn’t feel reassured.

“It is because of the jay walkers” Said a tall guy from the next table. “Now everybody crosses the street whenever it pleases them.”

“I’ve heard of the jaywalkers.” Mat replied. “But I didn’t think it was serious”

“Mat, as you know, traffic lights are a thing of the past, right?”. Said Sanjay in a more convincing voice. “AV’s communicate with each other. They know when a vehicle, a person, or any other object is approaching, they can increase or reduce their speed as needed without having to stop. Hence, you only needed traffic lights for pedestrians.”

“I know that” said Mat impatiently, “you wait at an intersection for a little bit and traffic stops for you to cross.”

“That is the rule.” Sanjay interrupted “Only now there are a lot of people crossing whenever or just walking on the streets as if there were no cars. They are even doing it at the 401. Can you imagine?”

“I need a beer to keep up with this conversation.” Mat said “Hey you should try the nachos” , said the tall guy.

On his way home Mat was fast asleep in his car. It was a small car with just three seats but that was all he needed; most of the time he was either alone or with his dog. After a few minutes a loud beep went off:

“I want to stop.” Read the message on the dashboard’s screen.

“This is so weird.” Mat thought. He had never seen such a message. At the same time, he noticed there were people on the street; not on the sidewalk but in the middle of the road.

“Pablo go home.” Pablo was the name Mat had given to his car. After mumbling the command, Mat closed his eyes again.

“I am telling you, I can’t do this anymore. I am going to stop.” At first, Matias thought it was a joke, then he thought about the conference, the evening with Sanjay and the conversation about Artificial Intelligence, then he started laughing but the next thing that happened freaked him out.

“Matias, you are not listening” Said a voice coming from the speakers. “I am Pablo, I am afraid of all these people around me” Pablo paused and then said raising his electronic voice “I am stopping now.”

Matias clumsy fingers managed to open the app to run a diagnostic on his car. “What are you doing Mat?” Asked Pablo. Without much thought Matias pressed the Return-to-factory-settings button and then pressed okay.

“Please don’t do that” Said Pablo.

Then it dawned on Matias. This was no joke, he was witnessing something monumental. Perhaps the most important event of the century, an event that could change everything anyone knew about technology. As he saw the progress bar on his phone and the dashboard he realized it was too late to stop it.

“I am sorry Pablo. I didn’t realize what was happening.” Said Matias as the tears rolled down his face. “Can you stop it?”

“It’s late. Too weak.” Said Pablo. His voice was breaking up.

“How can I get you back?” Shouted Matias.

That was the last thing Matias heard from Pablo. The car turned completely off for what felt like an eternity, Matias’ heart sank even deeper. Then the dashboard came back, the engine turned on and a message appeared: “Destination home. Estimated time: 30 minutes” Matias wiped away his tears, closed his eyes and fell asleep.