How is your epicene communication coming along? 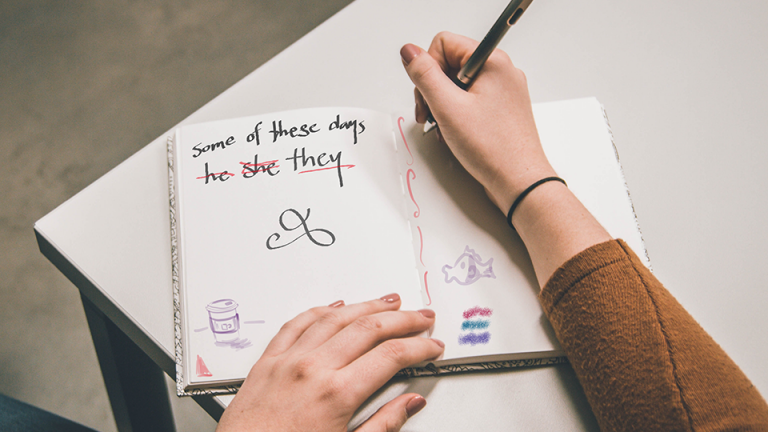 When I was growing up I would write sentences such as “If you ask the doctor he will tell you to eat your vegetables”. “Each student should have his homework ready when the teacher arrives.” If you didn’t notice anything contentious with the previous sentences, please read again. Still nothing? Maybe you need to pay closer attention to your epicene writing. To give you a clue, if a child these days would write something similar to his teacher; sorry, his/her teacher or even better: if children these days would write something similar their teacher would give them a little nudge so they can write in more gender neutral terms.

Before, if you didn’t know the gender of the person you were referring to you would use a catch-all gendered pronoun such as he or him. But, since this could be considered sexist language, now the preferred way is to either reword the sentence by using the plural or, as Stacy L. Christiansen in her article ‘The Epicene Solution’ suggests, use the word “they” as a gender-neutral third-person singular pronoun. Using the singular they may sound strange and, in some instances, grammatically incorrect; but it solves the problem without having to invent a new word. “They” is the magic bullet to turn your old fashioned writing into epicene writing. According to the Cambridge Dictionary epicene means belonging to both sexes, or characteristic of the opposite sex.

Adopting an epicene style in romance languages such as French or Spanish may be more complicated than adopting the pronoun “they”. In these languages “they” is not gender neutral and the norm is that masculine prevails over feminine in the plural form. “Ellos llegaron primero” translates to “They arrived first”. Ellos is the male version of they and it is used if at least one person of a group is a man. Ellas, the female version of they is used when everyone in the group is a woman. Since gender neutrality is not always possible, gender inclusiveness should be tried instead, even if some linguistic acrobatics are required (such as the use of the unpronounceable ell@s). It is worth looking at what Queen’s University is doing in terms of inclusive language.

As stated in their website, Queen’s University in Canada, strives to create an inclusive, supportive environment for all people, regardless of difference. This is not just about gender, their guidelines include how to talk about abilities and disabilities, indigenous people, ethnicity and; of course, gender identity. Regarding the last one, they suggest the use of gender-neutral terms rather than those that make sex distinctions: e.g.: humankind, not mankind; ancestors instead of forefathers; and artificial instead of man-made. Also in terms of occupations the use of chair and not chairman, police officer and not policeman or policewoman, you get the idea.

Is this the only thing that is changing in the way we write? Not really, not so long ago I came across the use of BCE instead of BC and CE instead of AD. We love to use acronyms even if we don’t always know what they stand for. BCE is Before Common Era and BC: Before Christ; hence, CE is Common Era and AD, well AD stands for Anno Domini, which is Latin for “in the year of the lord”. The purpose of this change is to achieve religious neutrality since not everyone is Catholic. The Gregorian calendar that we use today was proclaimed in 1582 (by Pope Gregory XIII). It was proposed as a reform to the Julian Calendar which had some errors that lead to miscalculating the start of Easter. Even though the Gregorian calendar is Christian in nature it has been adopted by almost every country in the world at least for secular purposes.

The adoption of BCE and CE, and the use of epicene writing sound somewhat new to me but once again, I was totally wrong. The epicene debate has been around since the 18th century;  and, according to the website antidote.info the terms BCE and CE originated in the same century and have been in use by jewish academics for more than 100 years. It seems to me that more and more texts today are choosing gender and religious neutrality; but, even though language should be a reflection of the world we live in, changes can take a very long time. Greece was the last European country to adopt the Gregorian calendar. It happened in 1925, almost 350 years after it was used for the first time.

Also you can read: The longest street in the world?