Autonomous Cars and Virtual Reality. Is this the Future of Transportation? 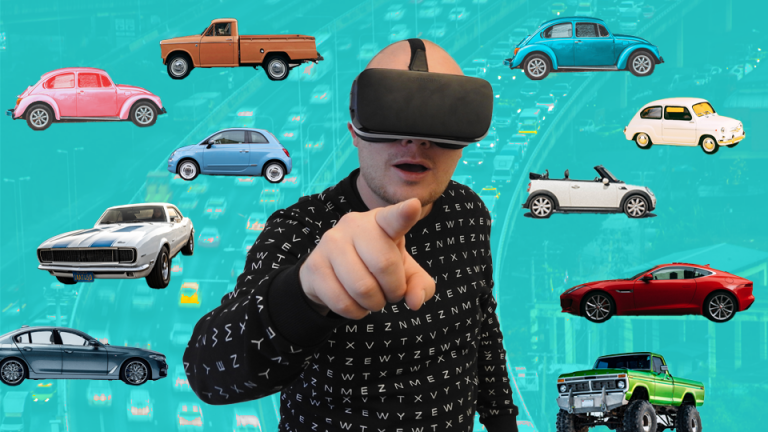 Whenever I see the sport of car racing I feel that this is what automobile pioneers had in mind when they invented the car. Cities grew and cars became ubiquitous bringing along the way a distasteful by product: traffic jams. Needless to say, most car owners don’t take full advantage of their cars’ capabilities. Manufacturers continue to produce racing machines that will sit on traffic and all terrain beauties that will never see a dirt road. Cars are mostly used to get from point A to point B in spite of having been designed for more playful purposes.

Humans created cities as a consequence of increased specialization and trade. Cities allow people to share their work and profit from the work of other people. Today there are more than 7 billion people in the world, most of them living in cities. According to some projections, the population will continue to grow, stabilizing at around 11 billion. This could happen circa the year 2100. Everyday, in cities around the world, a little miracle occurs: millions of souls work, study, create, protect, interact, cure, eat, play, love and move from one place to another making cities vibrant entities.

As the population continues to grow for the next 80 or so years, new cities will be developed and existing ones will increase in size and density. Getting around in a more efficient way is a challenge today and will continue to gain importance in the years to come. We will need new roads but it would be wise to demand better use of existing roads. We will need more places to park our vehicles but we don’t want to surrender our green spaces to idle cars. A comprehensive  public transport network is also needed, it would make for more liveable cities and a viable alternative to using cars. One solution that would make possible a better use of the existing roads it’s also a solution that is almost ripe for mass implementation: autonomous cars.

Imagine that the next time you go to work you did it in your self-driving car. Your normal commute used to be 1 hour but it wasn’t uncommon (accident, construction or weather) that it took you a lot longer. Since you are not worrying about the road you could be having breakfast, reading the news, taking a nap or having your first meeting of the day. Now, because your car is “talking” to the cars around it, it knows when to stop and accelerate. This reduces the space needed between cars while also increasing the overall speed of the network. Once you start using the roads more efficiently you don’t need to build as many roads, you can change their direction depending on the amount of traffic and time of the day. All these smarts in place play in your favor, you would find out that your 1 hour commute has been reduced to a mere 20 minutes. One caveat, you discover that when you arrive at the office there is no place to leave your car. The parking lot has been replaced by a green space with beautiful trees. What do you do? You allow someone else to use your car or, perhaps, you send it to the supermarket. When it arrives, someone would place your groceries in the trunk. The car will then pick you up whenever you are ready to leave the office.

I agree, this sounds like science fiction today but I hope it won’t be too long before we get to see some version of this. In the meantime, we can continue to develop another way to commute, a way that we were forced to put in overdrive during the pandemic: telecommuting.

One of the many learnings of the COVID-19 pandemic is that we can work from home whilst maintaining and even increasing our productivity. The technology to work from home has existed for many years; however, for the most part, companies have favoured face to face interactions. They reap the benefits of having everyone in the same building and the random conversations happening at the proverbial water-cooler. Most notably, Facebook, Google and Microsoft -just to mention a few- have built fantastic office spaces that inspire, foster real live interactions and most importantly, boost productivity. They aim to strike a balance between minimizing distractions and favouring informal encounters. If you haven’t seen their offices it is worth googling them; you’ll be amazed.

But now the world is changing and the paradigm is shifting towards more flexibility. In the aftermath of the pandemic, even the aforementioned tech giants are rethinking their approach to working from home allowing for less time at the office. Kevin Kelly, who by the way is a very entertaining and insightful thinker, talks about VR in his book “The Inevitable”, he describes how augmented reality and virtual reality could permeate every aspect of our lives. He explains that when you are immersed in a VR environment part of your brain knows that you are in a prefabricated environment; however, another part experiences it as if it was the real thing. VR would be like going from an internet of knowledge to an internet of experiences. Talking this technology to an office setting will open the door to new ways of interacting.  We will feel that we are in the same place as our coworkers from around the globe and remember it as if that was the case.

Our love of cars will remain but we will use different vehicles for transportation, cars could reclaim their role as playful extensions of our personalities.